The community is invited to visit select farms in Dufferin County Saturday to learn about modern farming.
Five farms located in Mono and Amaranth will open their gates to the public from 9 a.m. to 4 p.m. This year’s theme is where innovation and technology meets traditional farming, showcasing how digital technology is making a difference in traditional farming and land management. Jeanette McFarlane, one of the organizers, said modern farmers are using drones, robots and RFID chips to manage land and monitor livestock to make sure each animal is getting what they need.
On the tour is a dairy farm, a beef farm, a school of horsemanship, a Christmas tree farm, with wagon rides and a visit from Santa, and a one acre intensive four season vegetable farm. There will be added attractions at each farm and food options available.
The farm tour, formerly known as the Dufferin Town and Country Farm Tour, was started by a group of farmers, who 20 years ago realized there was an influx of city commuters moving into the area.
“It was almost like we were all living in the same space but it was like two different worlds,” said McFarlane.
The idea was to invite people to the farms so they could learn and have their questions answered.
“There’s all sorts of misinformation and myth, even back then, that wasn’t fair and wasn’t right, for people to make these claims and assumptions,” she said.
“There is such a disconnect now and people don’t realize it.”
She said people come to the farmers’ market in Mulmur in June and wonder why there isn’t any corn and apples available.
She tells them it’s growing and they’ll have to wait until… “You watch the light go on but in this day and age, when you can get whatever you want when you want it, people have lost touch with what it takes to grow something in our climate and what’s in season,” said McFarlane.
The tour has helped make connections with food and the people who produce it. She said people do want to support local food production and the tour has helped to improve relationships with farmers and newcomers.
“It has grown in popularity because, especially for families with young kids. Kids don’t see where food comes from other than the grocery store so young families are really taking the time to show their kids where their food comes from and there is a relationship,” said McFarlane.
The tour has evolved to include more environmental messaging. It takes more than 100 volunteers to make it happen.
Admission is free but people are asked to bring a donation of a non-perishable food item for food banks in Shelburne and Orangeville. More than 3,000 pounds of food and almost $1,000 in cash was raised at last year’s event.
Register online at dufferinfarmtour.com in order to receive an event passport. Anyone not able to sign up online can pick maps and passports at the information centre in Orangeville. 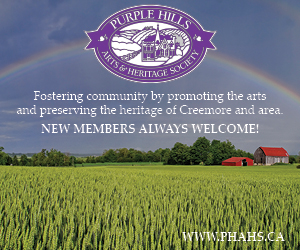