by Cookie Frosting
The North Pole is confirming that Santa Claus was the first in the world to receive the vaccine for COVID-19 and has been cleared for international travel.
The Echo has learned that Claus received the vaccine months ago during an early trial in order to ensure that he would be able to go on his pre-Christmas world tour, which include stops in Creemore and Stayner.
The news leaked out in the midst of controversy as some health organization insiders are claiming favouritism.
World Health Organization officials are defending their decision to approve Claus for the early trial saying he met all the criteria and was an invaluable test subject.
The information was not made public but was one of the factors that informed the decision of Canada’s chief medical officer of health Theresa Tam and Premier Doug Ford to declare Claus an essential service.
North Pole District Health Unit medical officer of health Dr. Candie Kane said Claus’ age alone qualifies him for the vaccine.
“After careful consideration, it was determined that given Mr. Claus is almost 2,000 years old and lives in a northern community where there is a congregate care setting for retired elves, he should be given priority,” said Kane. “Especially, given his Christmas duties when he is required to travel extensively and visit every single home on the planet.”
Kane admitted that little research had been done on the elves to see if their species is at risk of contracting COVID-19 but no one wanted to take any chances. The elves work in close quarters and although there have been no cases of COVID-19 reported in the region, given its insular nature, everyone involved wanted to take the utmost precautions to avoid a workplace outbreak at the toy factory.
It was acknowledged that with Claus leaving the compound to visit children there was a risk he could introduce the virus to the North Pole. Again, it is not known if the elves’ magic that surrounds Claus and gives him his special abilities would be enough to protect him from the virus.
“Mr. Claus is human, after all,” said Kane. “But after having lived for so long among the elves, he has obviously been altered on a molecular level in ways our doctors aren’t aware of.”
Even though Claus is now protected from the virus, strict protocols are still is place as a precaution to all. Personal protective equipment will be worn and North Pole officials are asking that families leave out hand sanitizer beside the milk and cookies. Families are also reminded to include only household members for feasting and carolling.
The vaccine is good news for the Simcoe-Muskoka region, which is going into lockdown, putting into place higher levels of restrictions.
In an official statement Claus said, “This vaccine is the best gift I could have asked for. It will allow me to complete my duties and bring joy to children around the world, at a time when it is needed most… It’s true, we weren’t sure how we were going to pull this off but I am now confident I can complete my duties safely. Ho Ho Ho.” 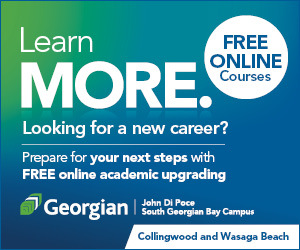