Collingwood Summer Music Festival continues August 1-11 with a dynamic array of top-level classical, world music and blues-jazz programming, sure to cater to all tastes.
Featured are award-winning ensembles and celebrated personalities including the Rolston String Quartet, Payadora Tango Ensemble, Zimbabwe’s Nhapitapi music and dance ensemble, and, Sugar and Gold (The Diana Braithwaite and Chris Whiteley Duo).
The festival has been rebooted by artistic director and world renowned pianist Daniel Wnukowski, who is connected to the area through his parents, who have retired in Wasaga Beach.
“From that experience and since the final presentation of the previous Collingwood Music Festival (2001 to 2011) it became clear to me that the community was truly missing having its own annual summer music festival. That festival dedicated almost 30 per cent of their concerts to world music and often onstage, musicians discussed similarities of their varied cultures. The new festival offers a similar complementary mixture of classical, world and jazz music which will once again provide a summer entertainment option second to none for the many music-lovers who live year-round or cottage seasonally in the region,” said Wnukowski.
There will be two concerts geared specifically toward families with children. Sugar and Gold will present a late afternoon educational kids’ show “All About The Blues” before their evening concert “The Story of the Underground Railroad in Canada,” relating the story of the arrival, challenges and riveting experiences of the African-American men and women who became members of Canada’s first Black pioneer communities. The finale matinee concert for the festival on August 11 will be the World Premiere of “Carnival of the Animals/The Hockey Sweater” an exciting new musical attraction for the entire family featuring an 11-member instrumental ensemble, R.H. Thomson (narrator), Trevor Copp (mime artist), and Michael Schulte (violin).
Visit www.collingwoodfestival.com. Tickets also available by phone at 705-445-2200 or 1-866-382-2200 and from the Theatre Collingwood Box Office, 115 Hurontario Street (Suite 104) in Collingwood. 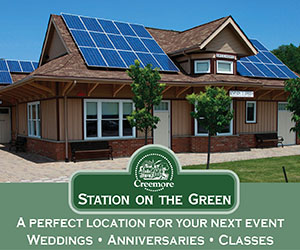