Three of the main user groups of Dufferin County’s Main Tract forest came together June 16 for a one-of a-kind race that welcomed participants on foot, two wheels and in saddles.

The idea, said Johnny Yeaman of Team Van Go, is to come together as a group of athletes who enjoy the forest to get to know each other and learn about others’ sports.

Seven teams of three set off that day in a relay race with the cyclists taking the lead for a 15-km ride on the cycling trail. They would then tag the runners, who complete a 10-km run. Lastly, horse and rider head out on a 10-km on the designated equine trail. But the teamwork doesn’t end there.

Once the horse and rider cross the finish line, the team takes the horse through a cooling procedure and the clock doesn’t stop until the horse’s heartbeat is down to 60 beats per minute

Sue Downing, of OCTRA, explains the equestrian instructs the cyclist and runner on the team how to untack and cool the horse using a wet sponge on the neck and chest area. The runner and cyclist likely have little to no experience with horses and they do not rehearse. There is a follow-up to the cooling when one member of the team does a trot out with the horse, going for a little jog. It is all part of a veterinarian supervised process to ensure a horse wasn’t pushed too hard during a race and that it isn’t injured.

Yeaman and Downing said there was some excitement during the Triple Crown, because two teams battled for first until the horses finished neck-and-neck. The third horse to start the race caught up with the second and tied with the first, so it came down to the cooling procedure to determine the winner, with Tyler Hollema (cyclist), Karen Yeaman (runner) and Sue Timbers (equestrian) ending up in first place and Taylor Genoe (cyclist), Kevin Knight (runner) and Lesley Danko (equestrian) coming in second (pictured). 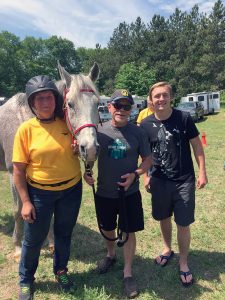 The three-sport relay race is a unique event that has come out of efforts to make the forest user-friendly for all sports. Yeaman said it is a fun event in the spirit of education and cooperation by a community of athletes using the forest.

“We are passionate about our own individual sport and this event allows us to get together and share that passion,” said Yeaman.

Participants ranged in age from teen to 70s with family members participating on competing teams, with prizes supplied by Running Free in Orangeville.

The first Triple Crown event was in 2016, the second one this month and there is a plan to hold a third in 2019. It coincides with OCTRA’s Summer Solstice event.