Avening resident Anna Carruthers was named 2019 Senior Girls Athlete of the Year at Collingwood Collegiate Institute’s Athletic Banquet on June 11.
Carruthers is an accomplished runner, on the track and on the trails.
In cross-country, she has qualified to compete at OFSAA eight times, winning individua l GBSSA Champion and leading her team to a GBSSA title four times, missing the podium as an individual only once.
In track and field, she is a four-time GBSSA champion, this year capturing a pair of titles in the senior 3000m and as the anchor of a 4x400m relay that went on to place 9th in all of Ontario breaking the school record by six seconds. She also qualified in the 1500m to round out a very busy OFSAA.
Carruthers is also an accomplished alpine skier and competed for CCI in Grades 9 and 10.
“She has been a quiet leader and an outstanding athlete. I’ve seen her run though unbelievable conditions of rain and sleet and mud and I’ve watched her do it with bleeding feet – literally. Still, she has persevered. And now she can take her talents to run at Western University…,” said Coach Allan Coukell. 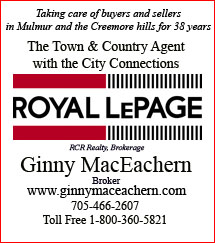