The long anticipated opening of YF Patissier and Chocolatier happened with a low-key soft launch this past week but word spread quickly and the village was aflutter with people comparing notes on the chocolates and baked goods.

The Y in YF is Yoonhee Chang and the F is Francois Rahier, of Toronto’s popular Rahier Patisserie, which opened in 1996.

Rahier is said to make one of the best croissants in the city and many of Toronto’s best pastry chefs who did apprenticeships with Rahier credit him for contributing to their success. Rahier has even been a guest on Martha Stewart’s television show.

He explains that having sold Rahier Patisserie in 2018 he was looking for something new. Rahier said he had planned to travel, but the pandemic put a stop to that, so he went exploring. He landed in Creemore as a result of a pleasant visit to the village’s main street, with his wife. The discovery of an available space, and a willing partner, sealed the deal.

“I really like the community. It’s a different pace. We’ll see what happens,” said Rahier. “I think being away from the city at my age is a good thing.”

The Toronto business had grown in scale to the point that Rahier was doing more management and less pastry so he is happy to be back to working with the dough – making croissants, baguette, Danishes, quiche, and starting Friday, the popular Rahier sandwiches.

Rahier said the ideal space was needed to make breads and chocolate in the same space. Chang apprenticed with Rahier in Toronto and after checking out Creemore, a partnership was formed. She said she took an interest in pastry as a hobby while working as an interior designer and after Rahier and travelled while working as a pastry chef for Fairmont, until the pandemic brought her back to Toronto.

YF is a European style Patissier and Chocolatier that uses tradition, and good quality ingredients.

Rahier, who is from Belgium, said he has always been interested in chocolate.

“It is never the same,” he said. “It takes a lot of creativity.”

Chang said she too loves working in chocolate, and always has.

In preparation for the new venture she spent four months at Ducobu in Belgium honing her skills and learning production techniques from the masters.

Chang is busy this week making some special Valentine’s treats, including a smash chocolate hearts, which have a hard chocolate shell and are filled with smaller chocolates. Everything is made in house, down to the tiniest decoration.

The workspace is filled with highly specialized equipment sourced from Belgium, including a precision cutter and machines used to keep the chocolate – dark, milk and white – at the perfect temperature and constancy. Rahier said the delay in opening was caused by the need for three-phase power and the installation was further delayed by the pandemic.

YF sources the finest Belgian chocolate, some single source, from ethical and sustainable sources. It can be purchased in its pure form or transformed into all kinds of creations, and bonbons with traditional flavours to the more creative, like honey balsamic and earl grey.

Chang said she is inspired by culinary flavour combinations and does some experimenting, which she finds very rewarding because the results are revealed right away.

She said the traditional ones are important because they are more accessible but the innovation is also rewarding and pleasing to customers.

Together, Rahier and Chang collaborate on chocolates and cookies – again, some traditional and some not. The showcase is also filled with cakes, tarts and pastries, all of which are taken away in glossy boxes lined in the same iconic green colour used for the Rahier packaging.

Jennifer Fielding is managing the front of house. She worked for Rahier in Toronto and said when she found

out about locating in Creemore she automatically wanted to be involved because of the respect she has for Rahier and Yoonhee, both their talent and who they are as people.

YF also has a gourmet coffee bar, and although there is no indoor seating, there will be tables and chairs on

the front porch in milder weather. In summer, YF will be serving ice cream made in-house. 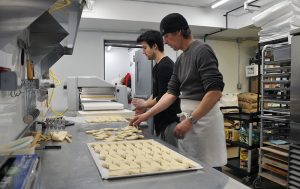 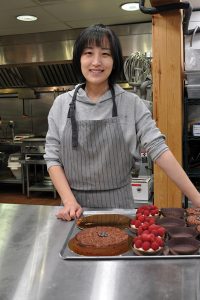 Above left: Francois Rahier and his son Nathan roll out a batch of tortillion at the newly opened YF Patissier and Chocolatier in Creemore. Right: Yoonhee Chang prepares desserts.