Tom Gateman went the distance in Creemore`s 6-5 win this past Sunday. Gateman pitched 7 innings striking out 6 while surrendering 5 runs, picking up his second consecutive complete game win. The bats were paced by Craig Bessant, Brandon Watson and Marc Dupuis, the three combined to go 7-12 with 3 doubles and 5 RBIs.

Seniors host Midland Saturday at 1 p.m. then will be back on the road Wednesday in Clearview and Thursday in Ivy.

Peewees moved to 10-1-3 behind a dominant mound performance by Landon Grant. In his first start back from injury Grant showed no signs of rust. 7 innings, 4 hits , 1 earned run and 10 strikeouts earned him his second win of the season in a 12-2 romp of Collingwood. Cal Stinson went 2-3 with a home run and 4 RBIs.

Peewees host Barrie for a doubleheader Saturday starting at 11:30am, then host Ivy Wednesday at 6:30 p.m.

The Mosquito team will be up north this weekend for the Muskoka Cup tournament in Bracebridge. Last Sunday they picked up a split in Midland, winning 6-5 in game 1, then falling 12-8 in game 2.

Next regular season game is Tuesday in Bolton. 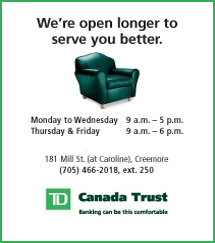